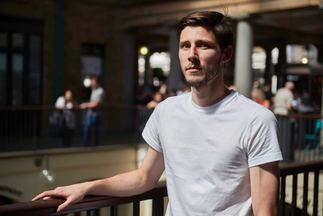 BRITISH MAN IS CROWDFUNDING A GREEK BAILOUT
It's been 2 days since Thom Feeney launched an online crowdfunding campaign to help solve the Greek debt crisis.
Using crowdfunding website IndieGoGo, the British shoe shop worker hopes to raise 1.6 billion euros, or $1.8 billion AUD, to save Greece who is set to vote in a national referendum this Sunday to accept or reject steep austerity measures.
Mr Feeney said he had been overwhelmed by the response and messages of support for the campaign, which has raised half a million euro in just two days. More than 30,000 people have donated to the "Greek Bailout Fund" so far, but it is still a long way from the final target of $2,310,805,735 that Greece needs to make its debt payment.
Mr Feeney, from York in northern England, said it was his first attempt at crowdfunding. He spoke positively about the project, rejecting any talk of it being a joke. While Mr Feeney said he had no personal links to Greece but wanted to help Greek people in a time of hardship. "I just thought perhaps a better way to help would be to do something immediately," he said.
You can also find this effort on Twitter: @GreekBailout
Since setting up the campaign on Sunday, Mr Feeney said the reaction had "snowballed" and "hundreds, if not thousands of goodwill messages" had flooded in.
Surprisingly, the bulk of donations in the first 24 hours came from Britain — which is not a eurozone member — and Germany — which has taken a hard official line on Greece's debt repayments.
Should the project be successful, donors would receive perks ranging from a postcard of Greek Prime Minister Alexis Tsipras, to a feta and olive salad, or a Greek holiday for two — depending the size of contribution. If the campaign does not reach the fundraising target all money will be returned to contributors.